In the spring of 2012, I unpacked bags and sat on a bed I shared with my mother, a bed inside a room rented through a former friend in the Falls Church area. I had returned from my first year at a small liberal arts school, Simon’s Rock in Great Barrington, Massachusetts. I had returned to stay, with fears of having reached the end of my college years.

Months back, I had sat with my school’s financial aid officer to discuss my financial standing and immigrant status.

Did I have a visa? No, I didn’t. What I had was a work-permit granted to Temporary Protected Status holders, people who enter the country illegally, but who are protected by the U.S. because they did so to escape from natural disaster and war. There were little hopes of attending a school with an annual $45k tuition.

I was slow to understand my scholarship search yielded no results because of my immigrant status. Whether I was a permanent resident or citizen, of which I was neither, was not something I thought about as a child.

I didn’t come into college aware I was in a financial mess; Simon’s Rock was a college for youth with ambition. I was accepted into the 2011 class with a 4.0 high school GPA and without a high school diploma. I wouldn’t need a high school diploma; I would graduate from the college and receive a Bachelor’s Degree. My plan, however, didn’t calculate my naivete about American systems.

While most immigrant students learn and come to understand their status by junior and senior year, when they meet with counselors to discuss their future, or lack of future, I didn’t have those years. I started Simon’s Rock after I had finished sophomore year.

After my conversation with the financial aid officer, I spent months in distress. I had to come to terms with the idea that the world wasn’t at the palm of my hands.

Instead, I was at the mercy of my immigrant status.

On August 10th, 2012, the day I turned 18 years old, I took the GED exam. I ranked in the 99th percentile rank in the Language Arts Reading and Writing portions. I made a return visit to Northern Virginia Community College, and was finally allowed to enroll.

I spent many unhappy classroom hours at NOVA, but I also discovered that my assumptions about community college were unfounded. In the eyes of these college students, I saw perseverance and dreams. I saw potential, saw hope for myself. In 2013, I began a short-lived experiment with social justice, taking part and promoting immigrant protests in Washington, DC.

Before long, I was wishing to stay longer at NOVA. The year I transferred to George Mason University–after Smith College and Georgetown University had rejected my application–I was hopeless.

I had no scholarships. I lived half an hour away from campus. I had to take on a part-time student load. I had tuition bills to cover on my own, after my first year at college drained my mother’s energy and finances.

I hated the struggle my future had become.

It was 2014 and I felt incapable of finishing college. I was working and studying, and maybe I was amounting to nowhere. In the middle of tears, I contemplated dropping out; this on more than one occasion. In the spring of 2016, George Mason University awarded me with a Stay Mason Fund scholarship. I had earned it not because of my academic record, but because I was on the verge of economic despair.

I was fortunate (or misfortunate) enough to have the scholarship renewed for my final year at Mason. There were many difficult moments.

This spring, I was in a car accident–another car ran straight into traffic and hit my car. On that February day, I spent several hours not worried about my health, but about what the insurance agent had said, if a totaled, the car couldn’t be fixed. A day later, it was declared totaled. 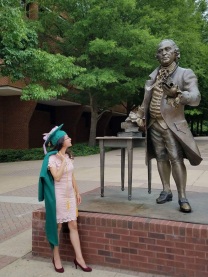 I didn’t know how I would manage school, except that things have a way of working out. Through Uber, Lyft, metro, bus, friends’ cars, and wandering feet, I did it. In spite of my low spirits, in spite of the new presidential administration, I made it.

This past May, I graduated with a Bachelor’s in English. Para mami / For mother: for all the years spent in uncertainty and doubt about the college dream.

One thought on “Hey, World: I Am Immigrant and I Graduated College”