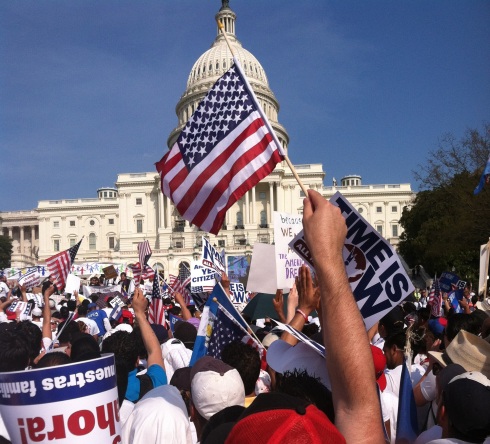 Yesterday, though I was over an hour early to the immigration rally, by the time 3:00 came around, I was nowhere near the front of the stage. In fact, I was moving towards the front a dos pasos, cada dos horas (two steps, every two hours, as that merry man next to me would say).

Coming early meant having an excellent view of people heading towards the West Lawn. With their white or state color shirts, and their flags and posters boldly waving in the air. The high sun smiling upon the Reflecting Pool and the Pentagon, coating them in elegance. The scene was set for a summer date: immigration and a call for reform, now.

It was thousands of people: African, Asian, Latino, White. But not enough. I have been told that the key to happiness is to have no expectations. I had too many expectations, and maybe I’m not alone in that respect. CASA de Maryland, 32BJ SEUI, and CARECEN campaigned intensively to bring DC, VA, and MD locals to the Capitol building. And what happens? They were busy with life, working, studying.

And know what? I missed my weekly 3 hour class for the cause. Mind you, it’s my favorite class: English composition. My mother, a 32BJ union member, was the only one from her sector to come to the rally. I didn’t come across her, but it was a given that we would both be there. She was losing an hour of pay, but gaining hours of engagement and hope. And know what else? Hundreds came from states away: California, Texas, New York… Because if you want something done, you make sacrifices.

I don’t even know what it’s like to graduate from high school. I do know how to measure consequences and make the choice that fits me. And yet, I would never know forced drop-out because your family needed some help in the fields.

Change doesn’t happen overnight, Claudia. Change may not come within the next weeks. Maybe it’s coming this Monday or Tuesday, maybe this May, if we are to believe Senator Menendez. All I can take for certain is that when it comes around, I’ll be ready. I’ve been ready long enough. There are people who have been ready 10 years ago. Some who have been ready their whole lives.